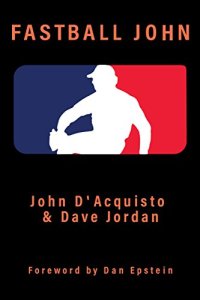 “Fastball John” by John D’Acquisto and Dave Jordan rivals Mike Piazza’s “Long Shot” as one of baseball’s best books of the decade. “Fastball John” features a prolific foreword by baseball historian Dan Epstein as well as references to a soundtrack of pop culture including: the Everly Brothers, the Byrds, Crosby, Stills and Nash, the Carpenters, the Temptations, Led Zeppelin, the Eagles, David Bowie, Fleetwood Mac, Donna Summer, Nicolette Larson, Blondie, Dave Mason, Don Henley, the Pretenders and New Order. “Fastball John” D’Acquisto will be signing his new book on September 24th and 25th from 1 to 4 PM at The Pennant, 2893 Mission Blvd. in San Diego’s South Mission Beach. It will be a family reunion of sorts since John Francis D’Acquisto was born in San Diego on December 24, 1951. He would later become a hometown hero while attending St. Augustine High School, where he excelled in both football and baseball.

In the 1920’s, most Italian immigrants who settled near downtown San Diego were fishermen from Genoa and Sicily. Many other Italian fishermen and their families moved to San Diego from San Francisco after the devastating 1906 earthquake. Like Joe DiMaggio’s father– who was a fisherman in the Bay Area–John D’Acquisto’s father, Fred D’Acquisto Sr., also depended on the fishing industry to put food on the table. As serendipitous as it may sound, the two sons of Italian immigrant families would meet in 1975 when John was honored by Joe DiMaggio and the Italian-American Society as its “Italian-American of the Year”. John’s father, Fred D’Acquisto Sr., was a local San Diego celebrity for 51 years as he worked for the legendary Anthony’s Fish Grotto Restaurant in the vibrant downtown Little Italy community. Starting out as a young teenager, John’s father worked himself up to dining room manager and would split his time between the original restaurant and their sister location, the Star of the Seas.

A first-round pick in the 1970 amateur draft, John D’Acquisto was selected by the San Francisco Giants. Blessed with a death-defying fastball, “Johnny D” made his MLB debut for the Giants late in the 1973 season. He was named National League Rookie of the Year and National League Rookie Pitcher of the Year by The Sporting News in 1974. During the span of his ten season career, John D’Acquisto pitched for the Giants, Cardinals, Padres, Expos, Angels and Athletics from 1973-1982. Read John’s blog and order “Fastball John” today by clicking HERE.