With Ronald Reagan serving as America’s leader and the final episode of M*A*S*H* airing on television in 1983, Lenny Randle embarked on an Italian baseball adventure that lasted almost a decade before nearly making a miraculous MLB comeback at age 46 with the 1995 Angels. Not afraid of climbing into the stands to talk, sign autographs and pose for pictures with fans, Lenny Randle is a fan favorite both on and off the field. Infamous for teaching future ballplayers Italian phrases and encouraging them to get their college degree so they have something to fall back on, Randle practices what he preaches having received his Masters Degree in Education and started his own baseball school after retirement. Learning the game from the best, Lenny broke into the big leagues with the Washington Senators in 1971 under manager Ted Williams and was mentored by the likes of Billy Martin, Don Drysdale, and Tommy Lasorda during his illustrious 12-year career. 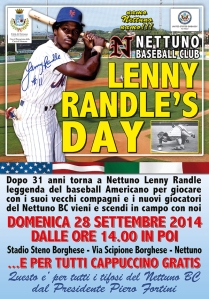 During the span of his 1,138 MLB games played with the Washington Senators, Texas Rangers, New York Yankees, New York Mets, Chicago Cubs and Seattle Mariners, Randle’s best season was in 1974 with the Texas Rangers when he hit .302 (7th overall in American League) and stole 26 bases. In 1983, the versatile player ventured to Nettuno at age 34. In his first season in the Italian Baseball League, he won the batting title handily just shy of a .500 clip. He later went on to lead the league in stolen bases with 32. The Southern California native found his power stroke in Italy during his 200-game career and hit 47 home runs. In a 1995 interview with the Tampa Tribune, Randle summed up his experience abroad by saying: “Playing baseball in Italy was like finding the fountain of youth. Guys over there relax and enjoy the game. It’s easy because there’s no stress.”

36,000 American soldiers landed at Nettuno in 1944 and brought along an arsenal of baseballs, bats, and gloves to keep their sanity during wartime. While the U.S. Army maintained its beachhead at Nettuno for five months, Italians were introduced to America’s favorite pastime. Baseball reached the masses when the Italian press learned of Joe DiMaggio’s visit to the game’s birthplace in Nettuno after his retirement in 1957. Randle’s Nettuno Baseball Club will pay tribute to the Italian American icon at Stadio Steno Borghese in 2015.

The Nettuno Baseball Club looks to inspire a whole new generation of baseball fans and players while upholding the legacy and traditions of the game in Italy. Under the leadership of General Manager Lenny Randle and President Piero Fortino, the Nettuno Baseball Club is building international alliances with corporate sponsors interested in expanding its reach through innovative marketing and interactive fan engagement. 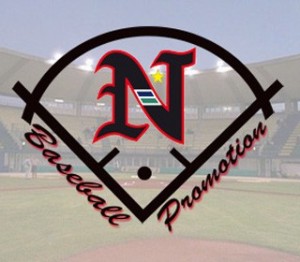 Until the Asian and American monopoly on baseball’s culture and resources eases up and Major League Baseball and its corporate partners invest in youth and professional leagues in Europe, the fate of the game’s future is dependent on the involvement of former MLB vets like Lenny Randle and Mike Piazza. Finding and developing players is one of Nettuno Baseball Club’s strengths. Both 20-year-old Atlanta Braves prospect Mattia Mercuri and 17-year-old LA Dodgers prospect Federico Giordani ascended up the ranks through Nettuno Baseball Club.

Cultivating prospects like Nettuno’s Mercuri and Giordani into major league-quality players and using them like missionaries to promote baseball in Europe will make a strong enough impression back home to give young Italian athletes the vote of confidence that playing MLB is a viable option. Every time Major League Baseball has reached out to expand its constituency to new geographic areas, it has been rewarded with tactical and cultural innovation, a broader fan base and a higher quality of play. Why should Europe be any different? Without MLB financing, the Nettuno Baseball Club and Italian Baseball League depend on corporate sponsorship and FIBS. To learn more about the fantastic opportunities afforded to businesses and athletes, please visit Lenny Randle Sports Tours.