Italian American Baseball Family tells the story of the Italian Americans’ role in baseball and in the culture of American sports. The movie documents an ethnic group’s rise from adversity and celebrates its triumphs in breaking into a game that was originally dominated by English, Irish and German immigrants. While some immigrants chose to change their names to mask their Italian identity, most felt the need to preserve and hold on to familiar things such as language, customs, and beliefs as a way of  tolerating the discriminatory practices and injustices they encountered in America. Italians were once considered second class citizens in the United States and invisible in baseball before players like Tony Lazzeri and Joe DiMaggio rose to prominence.

Children of immigrants felt stuck in the middle between protective parents who did not want the foreign ways of America to affect the close-knit Italian family, and their own desire to blend into the culture in which they were born. These children lived dual identities, conflicted by the rich Italian traditions of their parents inside their homes and the outside world which existed in the streets and in the schools, where they were taught to become American.

The solution to the stigma of being labeled as outsiders was to discover a way to become less different by assimilating into American culture. As a staple of mainstream American life, baseball presented Italians a viable point of entry as players and fans. By instilling the values of fair play, opportunity and democracy, baseball taught the children of immigrants how to become American.

After Japan bombed Pearl Harbor on December 7, 1941, the United States declared war and began targeting those of German, Italian, or Japanese descent. The Italians were the largest immigrant group in the U.S. at the time and about 600,000 of the country’s five million Italian immigrants, who had not yet naturalized, were forced to register as enemy aliens. Italians were considered immigrants to America, and baseball was one way these people could counter the negative immigrant identity as an outsider. The game bridged the gap so that Italians could integrate into the American way of life. 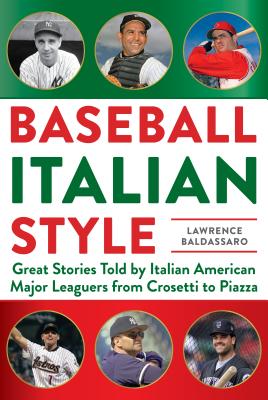 Many Italian Americans have participated in all aspects of baseball on the field, in coaching and team management, as broadcasters, and behind the scenes in administration as well. The National Baseball Hall of Fame has recognized many of them including Tony Lazzeri, Joe DiMaggio, Roy Campanella, Yogi Berra, Ernie Lombardi, Phil Rizzuto, Tommy Lasorda, Ron Santo, Joe Torre, Tony La Russa, John Smoltz, Craig Biggio, and Mike Piazza.

No one better epitomizes the culmination of the evolution of Italian American baseball or in American society than A. Bartlett Giamatti. He understood the nature and significance of the immigrant experience, and wrote about it as eloquently as he did about baseball. “Bart” Giamatti was the grandson of an immigrant laborer who became the president of Yale, then president of the National League before ascending to the office of commissioner of MLB. Italian American Baseball Family also explores how Italian Americans have circled back to Italy to help grow the game abroad by playing for Team Italy in the Olympics and in the World Baseball Classic.

Father Lou Colabello was the starting pitcher for Team Italy against host Team USA at Dodger Stadium in Los Angeles during the 1984 Olympics while his son Chris Colabello later played baseball in Italy as a youth and, like his father, eventually went on to represent Team Italy internationally After pitching for the University of Massachusetts in a College World Series, Lou Colabello played baseball professionally in Rimini, Italy. His experience as an international baseball ambassador culminated when he pitched for the Italians in the 1984 Olympics. Chris Colabello played for Team Italy in both the 2013 and 2017 World Baseball Classics, bookending major league stints with the Minnesota Twins and Toronto Blue Jays. Flmmaker Roberto Angotti was joined by Chris Colabello and his father, Lou Colabello, for the Boston-area premiere of Italian American Baseball Family last year.

With the new arrival of Oakland Athletics Triple-A affiliate Las Vegas Aviators, it would come as no surprise to see ballplayers of Italian descent landing at the Nevada premiere of Italian American Baseball Family at the Windmill Library in Las Vegas on Sunday, September 8, 2019 at 2 pm. Admission is free for this family-friendly event. For more information, visit the Casa Italiana di Las Vegas website.